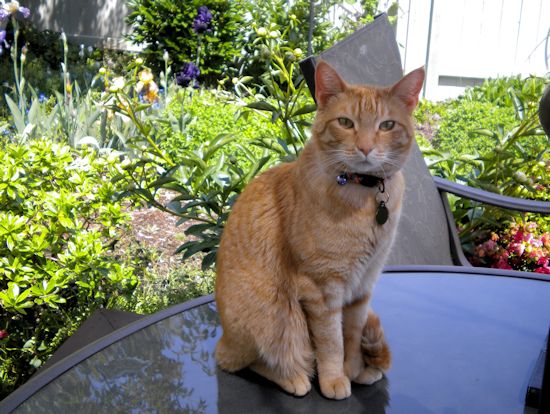 Raja is my sweet orange boy. He’s the orange polydactyl (six toed) tabby that we got as a kitten after we lost Max. He is about six years old now.

It was hard at first because we had really adored Max. But Raja is the sweet, pushy little boy who is funny, made us laugh, and who just wormed his way into our souls.

Speaking of pushy. I awaken every morning to Raja sitting on either the bed or the nightstand. The second he sees me stir he comes over and insist on climbing onto my chest, purring and sometimes drooling. I could do without the drooling. And in the evening or any other time I am sitting on the couch, he often comes over and pushes whatever I am doing out of the way and climbs into my lap or pushes against my chest. I can’t move.

As sweet as he is, he can be a real pain in the tush. When he wants out, he wants out! He howls, not meows, but howls until we let him out. The squirt bottle comes in very handy when we don’t want him out.

He is also quite a bully to his sister Zoe. He has made himself Alpha Kitty in our household. I sometimes think this is payback for him for Zoe being such a twit when he was a kitten hissing and swatting. Now he chases her around and jumps on her. It’s hard to keep him from doing it, but she can still hiss and swat.

He is a real guard cat in the yard and has gotten into a few fights. There is a tuxedo kitty, a little like Zoe, that he doesn’t mind. He doesn’t seem to mind other female cats either. There was a black stray that he used to fight with all the time until one day I noticed they were sitting side-by-side in the yard. When I brought Raja and Zoe in for dinner, guilt make me leave some food for the stray boy. That was the beginning of Jet adopting us.

One Reply to “Meet Raja”